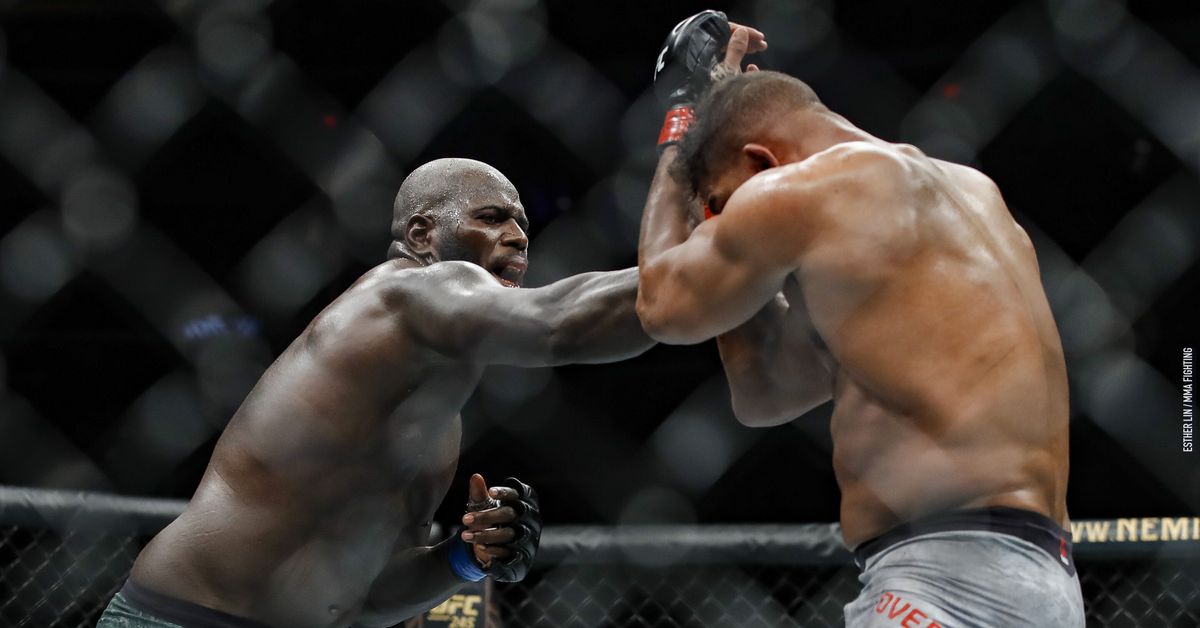 Overeem vs. Rozenstruik took place Dec. 7 at the Capital One Arena in Washington, D.C. Alistair Overeem (45-19) and Jairzinho Rozenstruik (11-0) clashed in the main event. Catch more video highlights below.

For more on Overeem vs. Rozenstruik, check out live blog below from MMA Fighting’s Steven Marrocco.

Round 1: The heavyweights trade leg kicks after Rozenstruik rebuffs Overeem’s glove touch. Another hard leg kick from the greener UFC fighter. Overeem grabs for a leg, telegraphing his gameplan. A punch forces him to reconsider. Overeem sticks a left straight and covers up as Rozenstruik looks for a counter. Cat and mouse game early. Overeem looking to distract his foe to set up a takedown. He fakes into the clinch and gets an outside trip to land in side control. He advances to half-guard and starts to punch from the top. Rozenstruik trying to scoot away, but you can tell he’s not the most comfortable from his back, and Overeem isn’t going anywhere. Rozenstruik gets some space and gets to his hands and knees. He tries to spin, but Overeem is on him and maintains top position. Side mount for Overeem, who begins to throw lateral elbows. The round ends with “The Reem” on top.

Round 4: Overeem opens up with a punch combo and closes distance. Rozenstruik still pounding away at his opponent’s guard and not having much luck. Meanwhile, Overeem’s left hand is landing regularly, and his kicks are there. Takedown entry is too far back, and Rozenstruik finally opens up. Most of the shots are blocked, but a few body shots get through. Overeem back to his game plan, inching forward to set up his left hand and takedown. More kicks to the legs and body from Overeem, and Rozenstruik isn’t responding very strategically. But he still leaps across the cage suddenly with a kick and flying knee, and Overeem is forced to cover up for dear life. A clinch attempt is not successful, but a pair of punches are good for the former K-1 and Strikeforce champ. Time running short, and Overeem running away with this fight. Rozenstruik explodes again with a flying knee and punches, but they’re blocked as time expires.

Round 5: Rozenstruik needs a knockout to erase Overeem’s lead on the scorecard, and he gets to work with a slightly higher pace. Overeem gets clipped with a punch shooting in, but he recovers and continues to fire his left hand to score. Another push in, and Rozenstruik frames off the fence. Overeem is pushed off, and Rozenstruik throws a lead elbow. Rozenstruik misses an uppercut as Overeem closes, and they’re back against the fence. Overeem tries to roll into guard from a single-leg and can’t make it happen. Rozenstruik fights off the next shot, and they’re back where they were. Audience isn’t having it any more. Rozenstruik trying to set up something big, and Overeem kicks his cup, prompting a very short pause. Overeem wings that left overhand again and misses. Rozenstruik waiting and waiting, only to get preempted by his opponent’s strikes. When he returns fire, Overeem’s guard is waiting. One minute to go, and Rozenstruik needs a miracle. He’s plodding forward, and his corner is screaming at him. He stuffs a takedown and advances again. More shots are blocked and Overeem comes back with a few of his own punches. Out of nowhere, Rozenstruik lands a right hook that drops Overeem cold. That’s it. Overeem’s mouth is split wide open. 4:56 is time of stoppage.

MMA Fighting scores the round