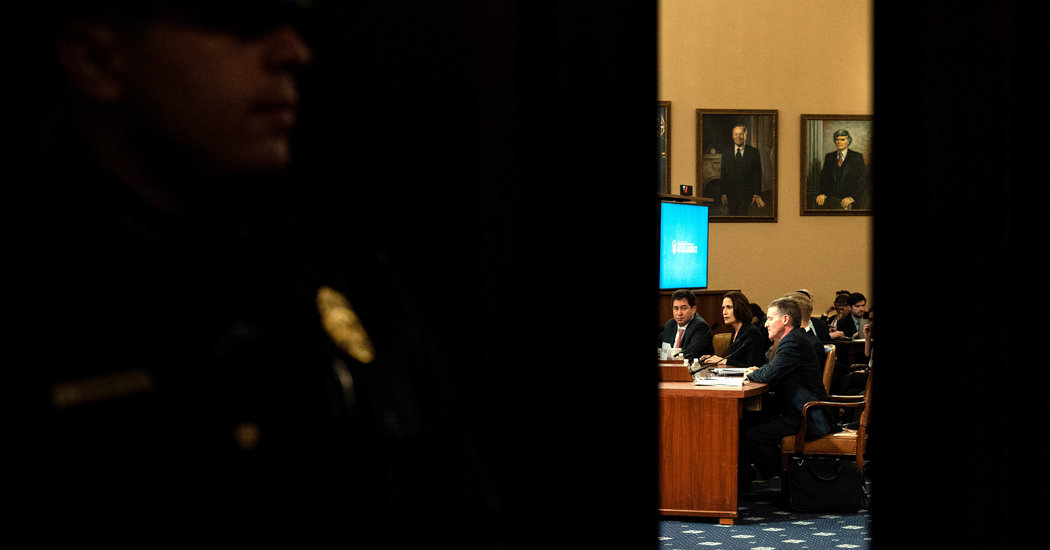 WASHINGTON — Over four decades in public life, President Trump has sought to bend business, real-estate and political rivals to his will. Facts that cut against his position have been declared false. Witnesses who have questioned his motives have been declared dishonest. Critics of his behavior are part of a corrupt, shadowy effort aiming to damage him.

And, as he likes to put it, his own actions are always, to one degree or another, “perfect.”

That approach — which proved effective for Mr. Trump as he faced off against the special counsel, Robert S. Mueller III — is about to face a formidable test.

The White House and congressional Republicans allied with Mr. Trump are preparing for a Senate trial in which they will not only say that Mr. Trump did nothing wrong, but present a version of events that portray him as the victim of a broad plot to undermine his presidency even before it began.

That narrative will include claims that Ukrainians meddled in the 2016 election instead of the Russians — an unfounded allegation refuted by the administration’s own intelligence agencies as recently as this week — and that Hunter Biden, the younger son of Vice President Joseph R. Biden Jr., one of Mr. Trump’s leading 2020 Democratic rivals, made money in Ukraine based off his connection to his father.

In a telephone interview with “Fox and Friends” on Friday morning, Mr. Trump listed those he viewed as behind the effort against him — “the Democrats and their machine, the media machine, the fake, corrupt media,” he said — and said he wanted to defend himself against the allegations against him raised by House Democrats.

Using a blend of blunt force and more typical Washington wooing of Republican lawmakers, along with a mix of false claims interwoven with proven facts to paint himself as a victim, Mr. Trump has worked a defensive playbook that he honed during the Mueller investigation.

In the course of the hearings held the past two weeks by the House Intelligence Committee as part of the impeachment inquiry, his goal has been to bulldoze past formidable testimony by an array of witnesses — including some in his own White House — who under oath laid out, chapter and verse, the president’s pressure campaign against the Ukrainian government to investigate, or say it was investigating, the Bidens.

To Democrats, this portrait of Mr. Trump was damning. To White House aides, the fact that the witnesses could not say he was withholding military aid until he got an announcement of a Biden-related investigation was proof that he had done nothing wrong. And rather than dispute each fact said under oath, they focused mostly on process and the handling of the hearing by the chairman of the House Intelligence Committee, Representative Adam B. Schiff of California.

The strategy was similar to the Trump legal team’s handling of the Mueller inquiry, which they frequently charged was not following normal procedures. And when the special counsel’s report did not reveal evidence personally connecting Mr. Trump to the Russian efforts to influence the 2016 election, the president and his advisers seized on it as a “total exoneration.”

“There’s never a time when he accepts anybody’s judgment over his own,” said Michael D’Antonio, one of Mr. Trump’s biographers. “I think that he does this so well and that it has worked so often that he may not have another message.”

“He once told me that if you stay with a position long enough, there’s a very good chance it would become correct,” Mr. D’Antonio said.

As it eventually did with Mr. Mueller, the White House has adopted a defiant posture toward the House Democrats. The White House counsel has declared the impeachment inquiry illegitimate because of the way in which it has been conducted, and because its parameters have changed over time.

In the meantime, Mr. Trump has sought to seize on the allegations against him and turn them on someone else, a familiar tactic. He insisted it was really Mr. Biden and Hunter Biden who were linked to corruption in Ukraine and that bad actors there had done him harm by meddling in the 2016 election, a claim intelligence officials have roundly rejected.

In the “Fox and Friends” interview, Mr. Trump unleashed a torrent of falsehoods to support his claims, including saying that the Obama administration wiretapped his 2016 campaign and asserting that Mr. Schiff “made up” a phone call of his, when, in fact, the California congressman stated at the time that he was conveying “the essence” of Mr. Trump’s July 25 call with President Volodymyr Zelensky of Ukraine.

Mr. Schiff, Mr. Trump said, was “sick,” was part of a broader effort to damage his presidency and should be prosecuted.

“They thought I was going to win, and they said, ‘How could we stop him?’” he said. “They tried to overthrow the presidency. This is a disgrace.”

That effort, he said, began even before he became president, adding that an investigation into it would reveal “the greatest political scandal in the history of our country.”

At that point, the hosts Steve Doocy and Brian Kilmeade — who are reliably friendly to the president — conveyed a hint of skepticism.

Mr. Trump said he could not reveal it. “I can only say that we have a lot of information that a lot of bad things happened,” he said.

Asked about the hearings, Mr. Trump flatly denied testimony given under penalty of perjury by a succession of career national security officials.

He focused in particular on the account given by Gordon D. Sondland, his ambassador to the European Union, of a phone call he had had with the president in a restaurant in Kyiv, Ukraine’s capital, that another State Department official, David Holmes, who was sitting with Mr. Sondland, said he had overheard.

“How about the guy with the telephone? How about that one?” Mr. Trump said. “I guarantee you that never took place.”

“Well, I have really good hearing,” he said. “And I’ve been watching guys for 40 years make phone calls. And I can’t hear when — you could be two feet away — I can’t hear people making calls. I can’t hear the other side; the phone’s up in the air. Unless you have it on the speaker phone, you can’t do it. That was a total phony deal.”

And he falsely claimed the Democratic National Committee gave its hacked internet server from 2016 to a Ukrainian firm.

To ensure support as the impeachment process plays out and in all likelihood is followed by a Senate trial, Mr. Trump and his aides have spent weeks meeting or speaking individually with congressional Republicans, at times hosting them at Camp David. At one White House visit recently, he hosted them for a screening of the movie “Joker.”

The efforts have targeted Trump critics like Senator Mitt Romney of Utah, who have listened to the president describe how he has been denied due process, and have increasingly come to agree with him, according to people familiar with the meetings.

The White House and some of Mr. Trump’s closest allies on Capitol Hill have also pushed for building more aggressive support in the House and the Senate.

In recent weeks, they have put the weight of the presidency behind an effort to persuade Georgia’s governor to appoint Representative Doug Collins, currently the top Republican on the House Judiciary Committee, to the state’s soon-to-be vacant Senate seat.

Mr. Collins has actively jockeyed for the appointment, which would not only put a reliable defender of the president into a key Senate position before a trial, but could allow someone like Representative Jim Jordan of Ohio or Representative John Ratcliffe of Texas, pugnacious faces of Mr. Trump’s impeachment defense so far, to replace Mr. Collins on the House Judiciary Committee as the impeachment process shifts there.

The ascension of Mr. Jordan or Mr. Ratcliffe would also create another vacancy that Republican leaders could fill with a defender of the president like Representative Mark Meadows of North Carolina.

But even without the reinforcements, congressional Republicans — many of whom are wary of incurring the president’s wrath and being punished for it by their party — have either echoed the White House claims against witnesses or found other ways to try to maintain focus on the Bidens, often in starkly personal terms.

Senator Marsha Blackburn of Tennessee, who has bound herself to Mr. Trump, used Twitter to attack Lt. Col. Alexander S. Vindman, a National Security Council official who was on the July 25 call the president held with Mr. Zelensky, and testified this week that he was immediately alarmed by the request for an investigation into the Bidens.

“Vindictive Vindman is the ‘whistle-blower’s’ handler,” Ms. Blackburn tweeted, referring to the anonymous government official whose concerns about the call prompted the House impeachment inquiry.

Senator Lindsey Graham of South Carolina, the chairman of the Senate Judiciary Committee and a key ally of Mr. Trump’s, has shown his support for the president in other ways.

On Friday, Mr. Graham announced plans to call Hunter Biden as a witness in a Senate trial.