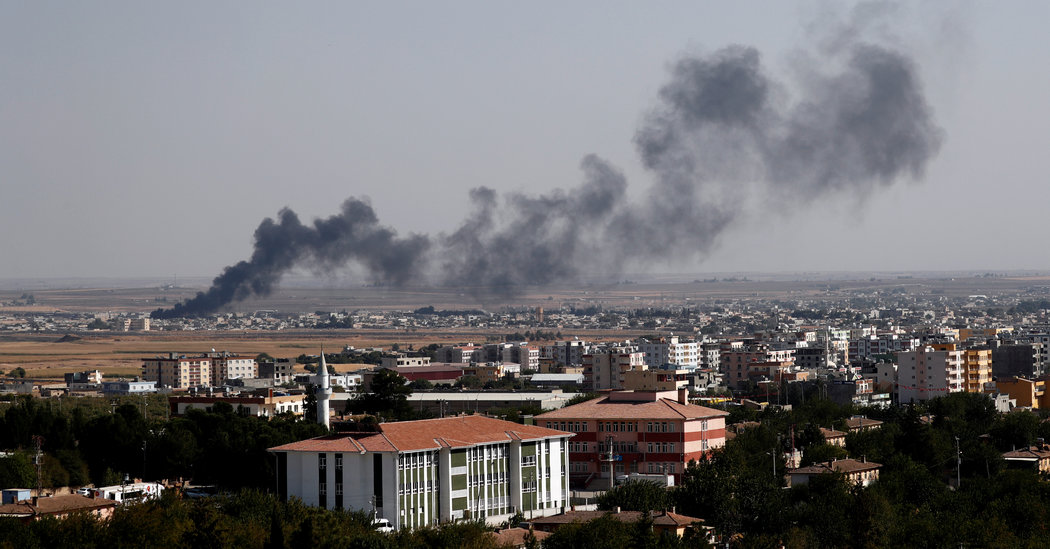 The escapes raised fears that the attempts to contain affiliates of the militant group were crumbling.

A Kurdish official also said that the flag of the Islamic State, also known as ISIS, had been raised in the countryside between the camp in the Kurdish-held town of Ain Issa and the Turkish border, another indication of how the Kurdish authorities were losing control of a region they had freed from the extremists only months ago.

“We are facing very fierce attacks and we’re forced to decrease numbers of guards,” said the official, Ciya Kurd, of the Kurdish-led regional authority, who confirmed the break from the displacement camp after the Turkish strikes.

Amid the airstrikes and the camp escapes, the American defense secretary, Mark Esper, told CBS’s “Face the Nation” in an interview to be broadcast on Sunday that the United States would evacuate about 1,000 American troops from northern Syria in a “deliberate withdrawal.”

Mr. Esper said that the United States found itself “likely caught between two opposing advancing armies” in northern Syria and called the escalation of the conflict in the region a “very terrible situation.”

He said the United States had learned that Turkey was likely to expand its incursion “farther south than originally planned and to the west” in Syria, according to a transcript of his remarks published by CBS.

Analysts say that President Trump’s initial decision to pull back American troops shielding Kurdish allies in northern Syria could result in the group’s resurgence and have devastating consequences for the Kurds, who lost thousands of fighters in the battle against the extremists. A video capturing the execution on Saturday of at least two Kurdish prisoners by Turkish-backed Syrian Arab fighters illustrated the fallout of the invasion.

On Sunday, Turkey’s airstrikes pummeled Ain Issa, about 20 miles south of the Turkish-Syrian border, causing panic and unrest in the camp that housed nearly 13,000 displaced people, fewer than 10 percent of whom were relatives of Islamic State fighters.

Scores of people, including more than 700 relatives of ISIS, fled the camp, according to the Kurdish authorities. The number could not be independently verified, but a witness confirmed by phone that he had seen crowds of people hurrying from the camp around 9:30 a.m. Sunday.

The humanitarian aid group Save the Children also confirmed that foreign nationals had left the camp. Sonia Khush, who oversees the group’s work in Syria, citing her colleagues at the camp, said that all foreigners had left a secure facility that housed ISIS relatives.

The Kurdish authorities had repeatedly warned that, while they were confronted by the Turkish invasion, they would not have the resources to secure the prisons and camps containing ISIS fighters and their relatives.

After establishing a foothold on Saturday in Ras al-Ain, a strategic town close to the Turkish border, Turkey’s incursion into Kurdish-held territory in northern Syria entered its fifth day on Sunday, as Turkish troops and their Arab proxies made major progress on the ground. A Syrian Arab militia under Turkish command pushed deeper into territory held by the Kurdish militia, blocking major roads, ambushing civilians and claiming the capture of a second strategic town in northern Syria, Tel Abyad, roughly five miles from the border.

Turkey and its Syrian Arab allies are trying to wrest control of northern Syria from a Kurdish-led militia that spearheaded American-backed operations against the Islamic State and that is the offshoot of a Kurdish guerrilla group based in Turkey.

After partnering with American troops to drive out the Islamic State, the Kurdish-led militia emerged as the dominant force across the area, enraging and frightening the Turkish authorities, who see the group, which calls itself the Syrian Democratic Forces, as a terrorist organization.

On Sunday morning, Turkish-backed Arab militias ambushed and captured four employees of the Kurdish Red Crescent, a medical aid group, traveling north from Ain Issa toward the besieged town of Tel Abyad, a member of the aid group said by phone. The four employees were in a two-car convoy.

The Turkish-led force also took control of Suluk, a town about five miles inside Kurdish-held territory, according to the Turkish state-run news agency Anadolu. A Syrian activist in touch with the combatants and civilians in the area, Mustafa Hamida, confirmed the news.

Close-fire fighting could be heard in Tel Abyad on Sunday morning from the Turkish border town of Akcakale, suggesting that Turkish forces had entered the town after a four-day siege. The two adjoining towns are separated by customs buildings and a cement border wall.

Turkish-backed Arab fighters running a chat room called the Tel Abyad news agency announced they were clearing a western neighborhood, Al Sakhani, in the town, and posted photos of fighters standing in front of a security building.

The invasion has caused a huge surge in displacement, with more than 130,000 people fleeing their homes since fighting began on Wednesday. Many had already been displaced during the Syrian conflict.