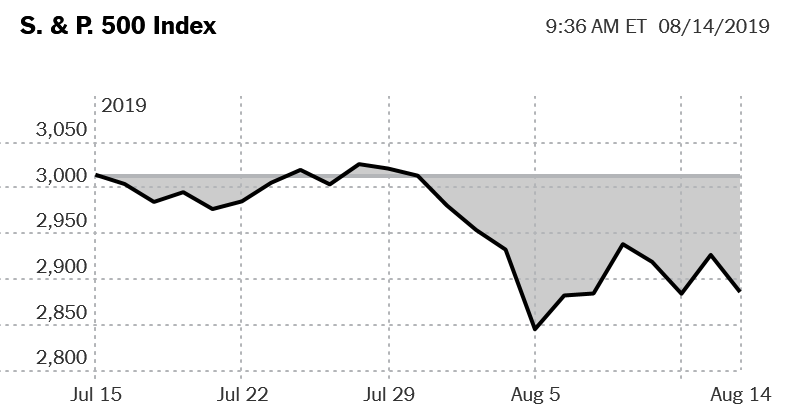 Stocks dropped on Wednesday, as the bond market signaled rising concern about the economy and data from Germany showed the country could be veering toward a recession.

The German government reported that its economy shrank in the three months ending in June. The largest economy in the eurozone, Germany has become particularly vulnerable to the trade war playing out between the United States and China because of its dependence on manufacturing and exports. A second quarter of decline would mean Germany is technically in a recession.

[Read more about how Germany is heading toward a recession.]

The news sent shares in major European markets lower. The main stock indexes in Frankfurt, Paris and London were all down 1 percent or more in midday trading. The S&P 500 dropped more than 1.5 percent in early trading.

Yields on United States government bonds also fell, signaling downgraded expectations for growth. The bond yields, which move lower as prices rise, have been tumbling ever since the trade dispute suddenly escalated in recent weeksand investors turned to the government bond market in search of a safe haven.

On Wednesday, the decline left yields on 10-year bonds below those on two-year bonds, in what’s known as an inversion of the yield curve. The yield curve is the bond market’s most reliable indicator of a recession, having preceded every economic decline in the United States of the last 60 years.

[Read more about the intensifying recession warning in the bond market.]