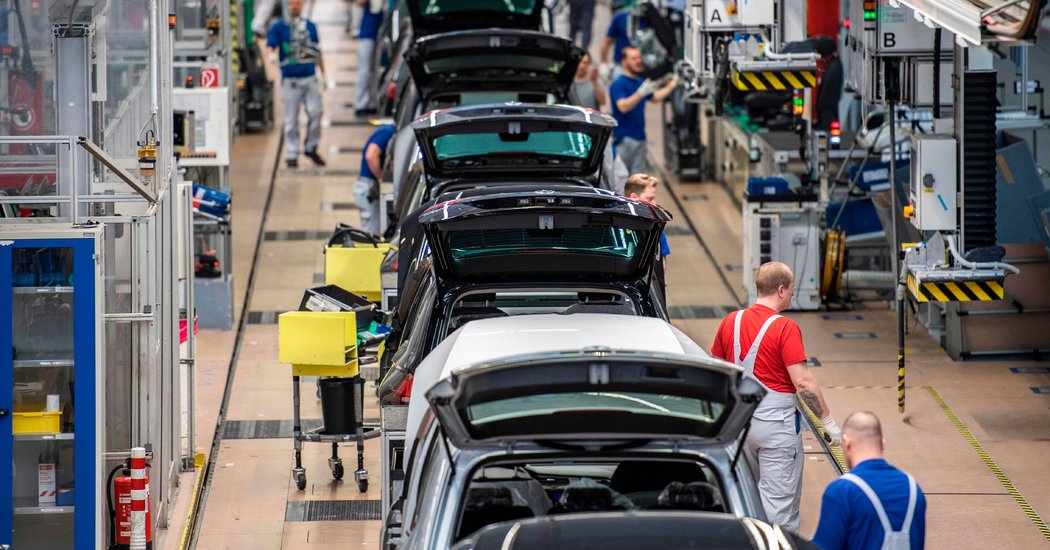 Frankfurt — In an ominous indicator of the damage inflicted by trade war, data released Wednesday indicated that the German economy is hurtling toward recession because of slumping exports.

Germany’s economy shrank 0.1 percent from April through June and has been treading water for the last year, the government’s official statistics agency said. Analysts at Deutsche Bank predicted that the economy will shrink during the current quarter as well, meeting the technical definition of a recession.

Europe’s largest country plays an outsize role in global trade, ranking behind only China and the United States in volume of goods and services that it exports. That makes Germany particularly vulnerable to President Trump’s trade war with China. It is also means Germany’s slump is a bad sign for the global economy.

Automobiles, Germany’s biggest export product, have become collateral damage. The carmakers Volkswagen, Daimler and BMW all earn at least one third of their revenue in China. But auto sales there have been slipping after years of explosive growth, in part because the trade war has unsettled Chinese consumers and discouraged them from making big purchases.

The decline in German growth was expected after numerous signs in recent months that industry is struggling. Still, the data helped drive down stock prices around Europe. The main stock indexes in Frankfurt, Paris and London were all down 1 percent or more in midday trading.

Germany’s economic performance was the worst of any eurozone country during the second quarter, separate data from the European Union statistics agency indicated.

That is an embarrassment for Germany, which has long lectured other countries on how they should manage their economies. The slumping growth is likely to increase calls for the Chancellor Angela Merkel’s government to step up spending to stimulate the economy.

“Today’s G.D.P. report definitely marks the end of a golden decade for the German economy,” Carsten Brzeski, chief economist at ING Germany, said in a note to clients. “The pressure on the German government to act will increase.”