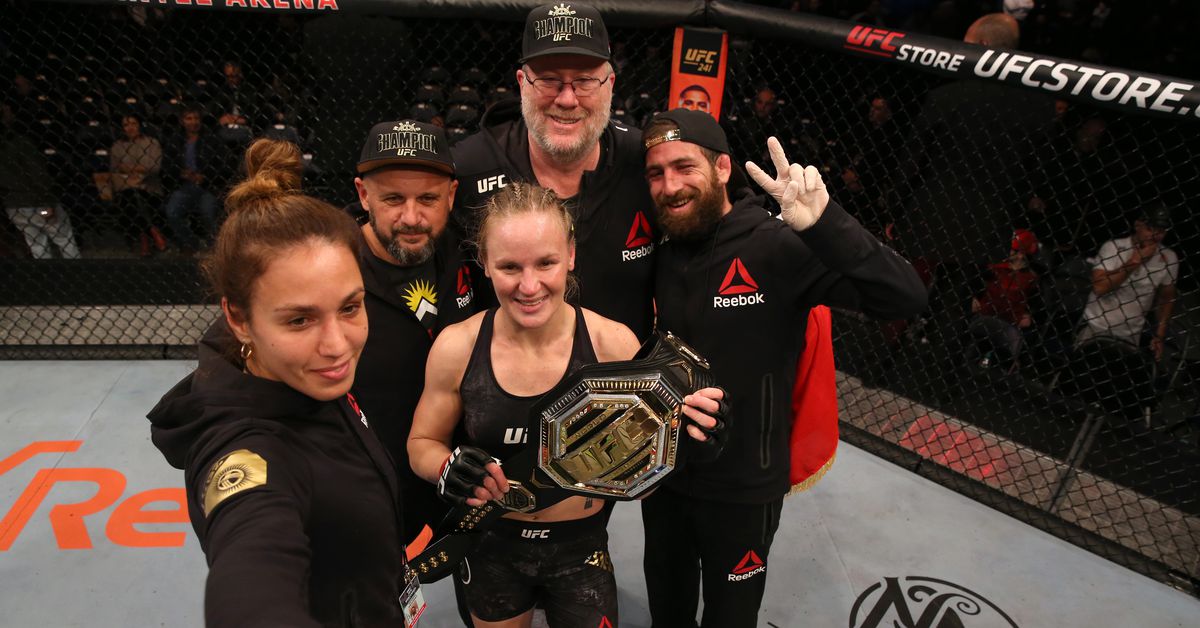 Watching Valentina Shevchenko cruise past Liz Carmouche in her flyweight title defense on Saturday in Montevideo, Uruguay, you can see the haves and have-nots divisions emerge within UFC.

With 12 different weight classes, some are going to be competitive and filled with interesting stories and championship chases. But others, like women’s flyweight, you really don’t have that kind of depth.

With Shevchenko, similar to Jon Jones at light heavyweight, it’s a combination of issues. It’s a champion who simply appears to be head-and-shoulders above the rest of the division, and a less interesting cast of contenders. The result is that their most interesting fights are with people outside the division.

Women’s flyweight is a new division, and at this stage in the evolution of the sport, a necessary one. The difference in weight from 115 to 135, particularly for women, created hardships for women on both sides of the scale. You had the women who were killing themselves to hit 115, and fighting in a weakened state, and the women who were giving up size to the 135-pounders, but simply had no way to hit the scale at 115.

In Shevchenko, you had one of the best bantamweights in the world, but one who Amanda Nunes had beaten twice and was able to make 125 without major issues. In time, one would expect women’s 125 to be a strong division simply because it’s the proper weight class for a high percentage of women in the sport.

Perhaps the problem with Saturday’s fight was simply Carmouche not being aggressive enough to have an interesting fight. But when they did lock up, it was Shevchenko who could outpower her, and standing, as shown by her win over Joanna Jedrzejczyk, it’s going to be difficult to find someone who can beat her there. The former was key because Carmouche was known for being physically strong for her size.

But when the fight was over, Shevchenko had no contenders any more interesting than Carmouche on the horizon. The most marketable next direction would be for Shevchenko to face Amanda Nunes, herself a two-division champion. It would be the trilogy fight in a series Nunes already has the first two wins in. That tells you how interesting the contender list is.

Right now, the most interesting and competitive divisions are every men’s division from flyweight up through middleweight, along with women’s strawweight. Those divisions all have multiple contenders and many, and in some cases, seemingly endless possibilities.

Heavyweight, particularly if Daniel Cormier can beat Stipe Miocic on Saturday, has limited possibilities. Cormier at this stage seems unlikely to defend the title again, as he’s said if this isn’t his last fight, he’s only interested in Jon Jones at light heavyweight.

A Miocic win really leaves only Francis Ngannou, who Miocic has beaten once, as a viable title fight. Even with a Miocic loss to Cormier, it’s still Miocic and Francis Ngannou who would seemingly be the top contenders to create a new champion. The rest of the cast has already had key losses and while they would have names, don’t feel like title contenders at this stage.

For Jones, there is nobody, which is why there is so much talk of Cormier cutting back to 205. Even if that fight happens, that’s almost surely it for Cormier. Thiago Santos gave Jones a close fight with two blown knees, but it’ll be a long time before he returns and you never know how much those surgeries will take out of him. The only other hope for the division in the near future would be for Johnny Walker to continue to run roughshod. If that happens, Walker would likely be rushed into a title fight with Jones way early given his lack of experience in facing top-tier talent.

Nunes has two belts. She has no real contenders at featherweight now that Cris Cyborg is seemingly gone from UFC. Ketlen Vieira, who hasn’t fought since in 17 months due to knee issues, is the only contender at bantamweight who has established herself as having earned a shot, with an unbeaten record and wins over Sara McMann and Cat Zingano.

With a Nunes vs. Cyborg rematch, which would have been the biggest women’s fight UFC could put on right now, looking unlikely, the most intriguing fight becomes Nunes vs. Shevchenko. If Nunes can make 125, that match would have a story of Nunes, who has to be considered the best female fighter of all-time at this stage, attempting to become the first fighter in UFC history to be champion in three divisions simultaneously.

And that’s a great story for the moment. But then what? She’d seemingly have to drop at least one of those belts, and that puts us right where we started.

Let’s look at how Fortunes Changes for Five Stars of Saturday’s show.

VALENTINA SHEVCHENKO – Shevchenko (18-3) scored a decisive win over Carmouche, but the lack of excitement in the fight didn’t help her much going forward. The very clear next title contender at this point seems to be Katlyn Chookagian (12-2), but she was just matched with Jennifer Maia at UFC 244. There are obvious long-term drawbacks to another Nunes fight, but if Nunes can make 125 in a healthy manner, and wants the historical significance of what a win would be, that is the fight to make right now.

VICENTE LUQUE – Luque (17-6-1) had another exciting fight, winning a split decision over Mike Perry (13-5). But in the end, because of the visual of Perry’s broken nose, it was Perry who got the bulk of the attention coming out of the fight. But it was a plus for Luque, and should get him in with bigger names, such as Robbie Lawler (28-14) or Michael Chiesa (16-4).

VOLKAN OEZDEMIR – In scoring a second0round TKO of ninth-ranked Ilir Latifi, Oezdemir (16-4) would make for a good opponent for either of the two former middleweight champions who have moved to light heavyweight. He’d be a good test for Chris Weidman (14-4). It’s a chance to show if Weidman belongs at this weight and for Oezdemir, the chance to beat a major name. Another fight that makes sense is Luke Rockhold (16-5), provided Rockhold wants to stay in the division.

MARINA RODRIGUEZ – Rodriguez (13-0-1) dominated eighth-ranked strawweight Tecia Torres (10-5) with a big enough name win to at least get her noticed. Rodriguez should get another name fighter next, such as Nina Ansaroff (10-6) or, depending on the state of her neck injury, Tatiana Suarez (8-0).