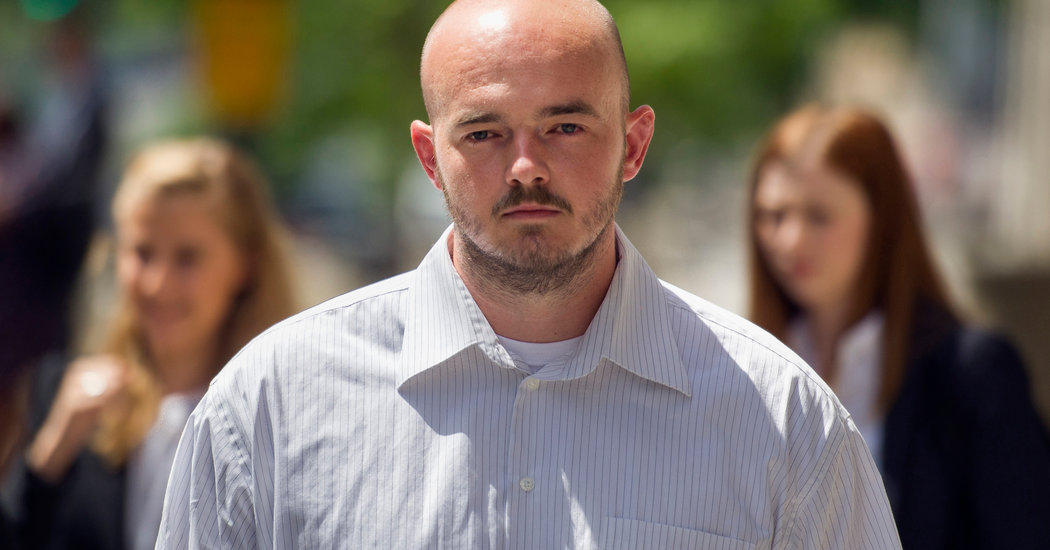 WASHINGTON — Shortly before a federal judge sentenced him to life in prison on Wednesday for his role in the deadly 2007 shooting of dozens of unarmed Iraqis in Baghdad, Nicholas A. Slatten, a former Blackwater security contractor, stood in a tan jumpsuit and defiantly proclaimed that he was an innocent victim of Justice Department prosecutors run amok.

“This is a miscarriage of justice that will not stand,” said Mr. Slatten, who in December was convicted by a jury of murdering an Iraqi civilian in Nisour Square, the act prosecutors said kicked off the chaotic hail of machine-gun fire and grenades targeting other civilians by guards in Mr. Slatten’s convoy that left 10 women, two men and two children dead, and 18 others injured.

But the trial judge, Royce C. Lamberth of the Federal District Court for the District of Columbia, rejected Mr. Slatten’s assertion of innocence, including a reference to a fellow Blackwater guard’s statement that it was he, not Mr. Slatten, who fired the initial shot that killed the driver of a white Kia sedan in the traffic circle, 19-year-old Ahmed Haithem Ahmed Al Rubia’y.

“The court’s view of the evidence is the same as that of the jury,” Judge Lamberth said, declaring that the other guard’s statement was an “effort to mislead authorities about what was going on,” and that it was Mr. Slatten who “shot Mr. Al Rubia’y between the eyes and killed him,” without provocation.

The government had hired Blackwater Security to escort State Department officials through a chaotic war zone at the height of the Iraq insurgency. One of the darkest episodes in the conflict, the massacre of civilians became a charged symbol of American abuses and prompted a rethinking of American reliance on contractors in war zones. It also strained relations between the United States and the Iraqi government: The Iraqis wanted to prosecute the contractors, but the Americans insisted on handling it.

Judge Lamberth rejected a constitutional challenge by the defense to a law mandating that Mr. Slatten receive a life sentence for the first-degree murder conviction, which the judge formally imposed. Mr. Slatten swiftly said “God bless you, sir” before guards led him out of the courtroom.

But his defense lawyer and friends and family from Tennessee, many of whom gave emotional statements declaring that Mr. Slatten was a patriot whom they believed to be innocent, made clear that they would keep fighting, including by asking the Court of Appeals for the District of Columbia to overturn the sentence and the verdict.

Left unmentioned in the courtroom were signs that President Trump might be weighing whether to grant a pardon to Mr. Slatten, along with several servicemen accused or convicted of war crimes: The New York Times reported in May that the White House had requested paperwork about his and a handful of other cases, according to two United States officials.

In his statement, Mr. Slatten also accused the government of covering up classified evidence that would have proven his claim, which prosecutors rejected, that insurgents started the Nisour Square episode. For Mr. Slatten’s supporters who stressed his prior combat tours with the Army before he went to work for Blackwater, that theory dovetailed with a recurring theme: the extreme peril of navigating a combat zone amid an insurgency, which Mr. Slatten’s father said many of those now judging his son did not understand.

But Judge Lamberth took exception to that, saying he had served a tour in the Vietnam War and had been in many dangerous situations. Nevertheless, he said troops must rely on each other and obey the rules to ensure that innocent civilians were not unnecessarily harmed. In the case of the Nisour Square massacre, he said, the evidence made clear that there had been no incoming fire against the convoy and that “there was no necessity” to shoot Mr. Al Rubia’y.

One security contractor involved in the episode, Jeremy Ridgeway, pleaded guilty to manslaughter and cooperated with prosecutors. But the cases against others involved in the shooting proved difficult.

A federal judge in 2009 threw out the indictment of five contractors, citing a “reckless violation of the defendants’ constitutional rights.” The judge said that investigators, prosecutors and government witnesses had inappropriately relied on statements that the guards had been compelled to make in debriefings by the State Department shortly after the shootings.

A new prosecution team was able to revive a case against four of them, and in a 2014 trial, a jury found Mr. Slatten guilty of murder and convicted three colleagues, Dustin L. Heard, Evan S. Liberty and Paul A. Slough, of voluntary manslaughter and using a machine gun to carry out a violent crime. Mr. Slatten was given life in prison, and the other three were sentenced to 30 years in prison.

But charging the defendants with machine-gun offenses, a crime not designed for battlefield situations, was controversial, even inside the Justice Department. In 2017, a federal appeals court ruled that the machine-gun charges and offenses were “grossly disproportionate to their culpability for using government-issued weapons in a war zone,” and said that Mr. Slatten should not have been tried alongside the other three.

The court ordered a do-over trial for Mr. Slatten and vacated the sentences of the three colleagues, deferring their resentencings until after his case is concluded. But in 2018, the first attempt to retry him ended in a mistrial, with the jury deadlocked after his defense lawyer stressed testimony from another contractor who testified that he, not Mr. Slatten, shot first. But prosecutors tried a third time, and won another guilty verdict against Mr. Slatten for first-degree murder.

Denouncing that outcome on Wednesday, Mr. Slatten also noted that prosecutors had offered to let him plead guilty to a manslaughter charge, but that he rejected the offer because, he said, he was innocent.

Judge Lamberth suggested that that level of charge might have been appropriate, but said that Mr. Slatten had decided to take the “all or nothing” gamble of going to trial on a more serious murder charge, and “got what he gambled for.”