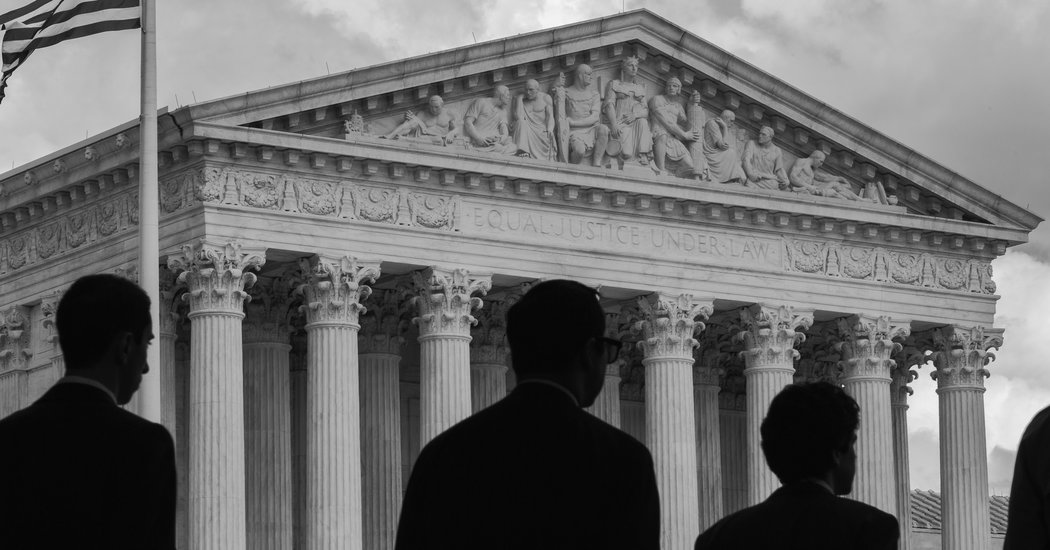 Last February, in declaring a national emergency that he said authorized him to spend money that Congress had refused to give him on his border wall, President Trump predicted, “We will then be sued.” But not to worry, he went on: “And we will possibly get a bad ruling, and then we will get another bad ruling, and then we will end up in the Supreme Court, and hopefully we will get a fair shake and win in the Supreme Court, just like” the Muslim travel ban.

And guess what: he was right.

The news cycle moves at supersonic speed in the Age of Trump. It’s hard to remember, through the din of the president’s insulting the city of Baltimore and one of its members of Congress, Elijah Cummings, that not even a week ago, after the close of business last Friday, the Supreme Court permitted the Trump administration to violate a federal statute and quite likely the Constitution itself.

The court did this in response to a request the administration styled as an emergency. The court acted without a public hearing, without a signed opinion and over the dissenting votes of the four liberal justices. As a result, although the case is still on appeal to a federal appeals court, the administration can now sign contracts for 100 miles of a 30-foot-high steel wall in five locations where Congress prohibited construction, using money that Congress refused to allocate for that purpose.

To be sure, it was a victory for the president, as he promptly tweeted. But it was a cheap victory — and cheap doesn’t mean free. There will be a price to pay, if not by the administration in its relationship with Congress, then certainly by a Supreme Court moving closer to an identity as the administration’s lap dog.

In my most recent column, I cited statistics compiled by Prof. Stephen Vladeck of the University of Texas School of Law in Austin on the dramatic spike in the number of emergency requests to the Supreme Court made by this administration, compared with its recent predecessors. While the justices don’t always give the administration everything it asks for, at least not right away, they grant some form of relief often enough to make it apparent that the administration comes to the court in a favored position. Following the court’s action on the border wall, Professor Vladeck summarized his findings in a post on Scotusblog, adding: “Most alarmingly, the court’s conduct gives rise at least to the appearance of inequity — that the court is willing to suspend regular order whenever the government asks (or, worse, when certain administrations ask), but almost never in any other case, regardless of the circumstances.”

In the border wall case, the question for the court was basically a procedural one: whether the administration was entitled to a stay of an injunction a federal district judge issued in June to block the Defense Department from moving $2.5 billion dollars from one account, where the department’s 2019 appropriations act had placed the money, into a different account that fell far short of the president’s budget request. The president had wanted $5.7 billion, to be used to build or fortify a border wall in 10 locations. Congress appropriated only $1.375 billion and specified that the money was to be spent only in eastern Texas. In claiming the right to divert money from elsewhere in the Defense Department’s appropriation, the administration boldly announced that it would build in places in New Mexico, Arizona and California where, it said, the Department of Homeland Security needed help in “combating the enormous flow of illegal narcotics.”

In responding to a lawsuit brought by the Sierra Club, which said that construction would imperil a fragile landscape that its members enjoyed for recreational purposes, the administration claimed it had “express statutory authority” for the transfer under the 2019 appropriations act. Whether the administration reads that law correctly is at the heart of the case, although in deciding whether the administration was entitled to a stay, the justices did not need to resolve that question and didn’t do so.

Nonetheless, it’s worth unpacking the statutory issue to understand the constitutional dimensions of a case that does not, on the surface, present a constitutional question. Section 8005 of the Defense Department appropriations act did authorize some transfers but set two requirements that must be met: the move must be in response to “unforeseen military requirements,” and can occur “in no case where the item for which funds are requested has been denied by Congress.” In granting the injunction, the District Court found that the supposed need for the wall was not unforeseen and that the congressional refusal to grant the president’s budget request operated as a denial.

The United States Court of Appeals for the Ninth Circuit agreed with that interpretation and strongly suggested that without statutory authority, the administration was venturing into unconstitutional territory. It declined to grant a stay pending the administration’s appeal. In doing so, the appeals court cited Article I of the Constitution, Section 9, Clause 7: “No money shall be drawn from the Treasury, but in consequence of appropriations made by law.” In other words, if the expenditure is not “made by law” — authorized by Congress — it violates the constitutional separation of powers.

The Ninth Circuit, having refused to grant a stay, will hear the administration’s appeal on the merits in the fall; final briefs are due in October. That’s not fast enough, the administration told the Supreme Court. With the end of the fiscal year approaching on Sept. 30, it explained, appropriations authority will expire along with the chance to go ahead with the projects this year even if the administration eventually wins on appeal. Perhaps sensing a weakness in the statutory argument, Solicitor General Noel Francisco also argued strenuously that the Sierra Club lacked standing to bring the lawsuit in the first place.

It was on this last argument that the Supreme Court’s majority hung its decision to grant the stay. The court’s one-paragraph unsigned order said only that “among the reasons” for lifting the injunction “is that the government has made a sufficient showing at this stage that the plaintiffs have no cause of action to obtain review of the acting secretary’s compliance with Section 8005.”

There is much that’s highly questionable about the court’s behavior in this case. When a court confronts the question of whether to grant a stay, the issue comes down to what courts call a “balance of the equities.” Which side will suffer the most from a suspension of the judgment, the winning side or the side that failed to make its case and wants another chance? Which side is most likely to suffer irreparable injury? In this case, the Sierra Club argued that if construction goes ahead, the damage will be done; the government will have won on the ground even if it ultimately loses in court. As for the administration’s claim of imminent harm, it can always try again in the next fiscal year.

The likelihood that the party requesting a stay will ultimately prevail on the merits is another factor that courts take into account. That the administration’s case on the merits is far from a winning one is, of course, no guarantee that it can’t win at the Supreme Court, but the justices will have to do some heavy lifting to make that happen. The House of Representatives filed a strong friend-of-the-court brief, reminding the justices that the “power of the purse is an essential element of the checks and balances built into our Constitution — even the monarchs of England learned long ago that they could not spend funds over the opposition of Parliament.” The House brief continued: “The administration’s attempt to insulate its conduct from judicial review cannot be reconciled with ‘the strong presumption that Congress intends judicial review of administrative action.’” (The quotation was from a 1986 8-to-0 Supreme Court opinion written by Justice John Paul Stevens.)

What’s most troubling about the court’s action is that even if five justices found the administration’s argument attractive or even compelling, the court’s unconditional surrender (even issuing the stay on the precise date the administration requested, July 26, and not a day later) was simply unnecessary. In the only signed opinion the court issued, Justice Stephen Breyer explained how the court could have permitted the government to enter into construction contracts in time for the fiscal year deadline while keeping the injunction in place to block actual construction.

As he explained his reasoning: “If we grant the stay, the government may begin construction of a border barrier that would cause irreparable harm to the environment and to respondents, according to both respondents and the District Court. The government’s only response to this claim of irreparable harm is that, if respondents ultimately prevail, the border barrier may be taken down (with what funding, the government does not say). But this is little comfort because it is not just the barrier, but the construction itself (and presumably its later destruction) that contributes to respondents’ injury.”

He continued: “If we instead deny the stay, however, it is the government that may be irreparably harmed. The government has represented that, if it is unable to finalize the contracts by September 30, then the funds at issue will be returned to the Treasury and the injunction will have operated, in effect, as a final judgment.”

Justice Breyer’s proposal was, he said, “a straightforward way to avoid harm to both the government and respondents while allowing the litigation to proceed.” I’m assuming that his three liberal colleagues, Justices Ruth Bader Ginsburg, Sonia Sotomayor, and Elena Kagan, would have agreed to this common-sense compromise if the offer could have peeled off a necessary fifth vote from the other side. That no fifth vote was forthcoming, that the majority rushed to give the administration everything it asked for, tells us all we need to know about the Supreme Court at this moment — and sadly, frighteningly, tells President Trump the same thing.