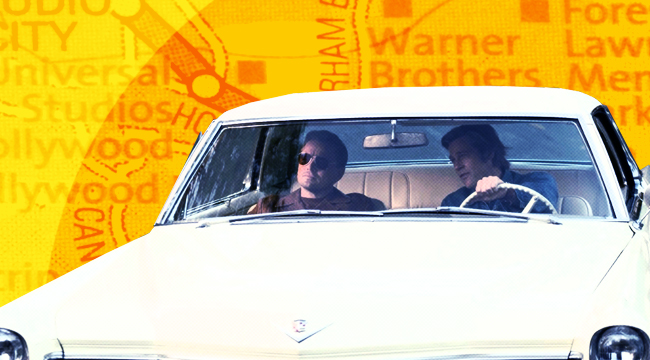 It’s almost impossible to watch Once Upon a Time… in Hollywood and not be charmed by the way Quentin Tarantino brings 1960s Los Angeles to life. As a person who grew up in LA, I know the busy, tangled arteries of Hollywood all too well, but Tarantino manages to make driving the through the neighborhood seem… fun. That’s legitimately Oscar-worthy on its own.

Most of the iconic landmarks featured in OUaTiH are still standing in some form today — you could definitely make a whole day out of ticking every location off a list. Alas, a few spots aren’t open to the public, like the Playboy Mansion, which is usually used for filming purposes, charitable events, or civic functions, while others are out of reach, like the Melody Ranch, used as the main set for the Rick Dalton-starring western Lancer. In the interest of keeping you from visiting a random A-1 Supermarket, which looks cool but is just a run of the mill grocer, we picked the eight Once Upon a Time… in Hollywood that are actually worth your time and energy.

We see the stunning hillsides of the Cameron Nature Preserve while Rick Dalton blows away bad guys from the bed of a pick-up truck during his episode of the TV series The F.B.I. Donated by Director James Cameron, the Cameron Nature Preserve at Puerco Canyon is 703-acres of public parkland just of Pacific Coast Highway where visitors can experience views of one of California’s most beautiful coastlines.

Anyone who lives in LA will tell you that driving to Malibu is a drag, so if you’ve made it out that far you might as well visit the beach at one of the several partially hidden access points. The people of Malibu go to great lengths to keep visitors away from the beach, but that land is 100% public, and once you’re on a beach in Malibu, you’ll see why they’re trying to keep it secret.

Clean, always sparsely populated, and peaceful, LA’s best beaches are in Malibu. Be sure to visit Lechuza.