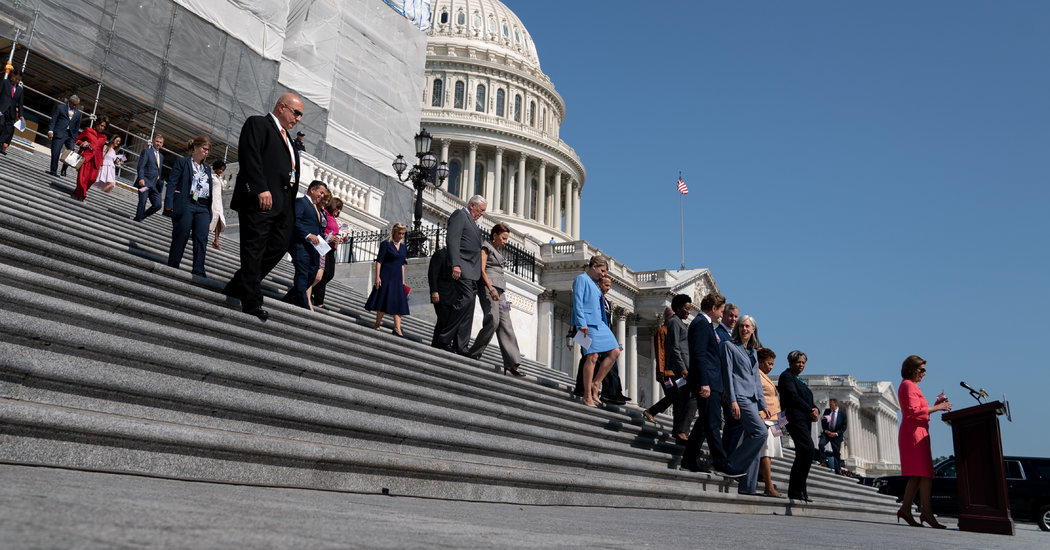 WASHINGTON — After I interviewed Nancy Pelosi a few weeks ago, The HuffPost huffed that we were Dreaded Elites because we were eating chocolates and — horror of horrors — the speaker had on some good pumps.

Then this week, lefty Twitter erected a digital guillotine because I had a book party for my friend Carl Hulse, The Times’s authority on Capitol Hill for decades, attended by family, journalists, Hill denizens and a smattering of lawmakers, including Pelosi, Chuck Schumer and Susan Collins.

I, the daughter of a D.C. cop, and Carl, the son of an Illinois plumber, were hilariously painted as decadent aristocrats reveling like Marie Antoinette when we should have been knitting like Madame Defarge.

Yo, proletariat: If the Democratic Party is going to be against chocolate, high heels, parties and fun, you’ve lost me. And I’ve got some bad news for you about 2020.

The progressives are the modern Puritans. The Massachusetts Bay Colony is alive and well on the Potomac and Twitter.

They eviscerate their natural allies for not being pure enough while placing all their hopes in a color-inside-the-lines lifelong Republican prosecutor appointed by Ronald Reagan.

The politics of purism makes people stupid. And nasty.

My father stayed up all night the night Truman was elected because he was so excited. I would like to stay up ’til dawn the night a Democrat wins next year because I’m so excited to see the moment when the despicable Donald Trump lumbers into a Marine helicopter and flies away for good.

But Democrats are making that dream ever more distant because they are using their time knifing one another and those who want to be on their side instead of playing it smart.

House Democrats forced Robert Mueller to testify, after he made it clear that he was spent and had nothing to add to his damning yet damnably legalistic, double-negative report, because they were hoping the hearings would jump-start howls for impeachment.

But it’s hard to get the mad blood stirring with Muellerisms like “This is outside my purview,” “I can’t get into that,” “I don’t subscribe necessarily to your — the way you analyze that,” and “I’m not going to go into the ins and outs.”

I never want to hear about the “O.L.C. opinion” again.

The Republicans were impressively craven and hypocritical. They are sticking with Trump, and no pallid reminder of his turpitude, his trellis of obstructions and his unpatriotic embrace of foreign interference in our elections, will change that.

The always blockheaded Louie Gohmert shouldn’t even be allowed to hold the coat of Mueller, a war hero and respected public official. But Gohmert yelled such crazy stuff at the former special counsel that he appeared to be auditioning for a spot on Fox News’s “The Five.”

The hearings were shameful for Republicans thirsting for re-election and a failure for Democrats thirsting for impeachment. It was many underwhelming hours of members of Congress reading to Mueller and Mueller saying, Yes, that’s what I wrote. Or at least what somebody wrote.

The recipe for emotional satisfaction on the part of the progressive left is not a recipe for removing Trump from the White House.

The argument about whether Trump is impeachable is the wrong argument. Mueller settled that. We know Trump did things worthy of impeachment. That is not the question we should be asking. The question is: Should he be impeached?

The progressive Puritans think we must honor the Constitution and go for it because it’s the right thing to do.

The attempt to impeach Trump is one of the rare cases in which something obviously justified is obviously stupid.

Unbelievably, Pelosi — long a G.O.P. target for her unalloyed liberalism — is derided by the far left for her pragmatism. But she has been through enough Washington wars to know that idealism, untempered by realism, is dangerous.

An impeachment could return Trump to power. The highchair king from Fifth Avenue would exult in his victimhood and energize his always-ready-to-be aggrieved followers.

It could also lead to Democrats losing the House as their moderates fall and help Republicans hold the Senate. No Republicans would vote for impeaching Trump and some Democrats might refuse as well. Even if the House acted, Mitch McConnell would smother it in the Senate, just like he did Merrick Garland.

It’s better to pull out Trump by the roots in the election and firmly repudiate him. The Democrats should focus on the future, not the benighted past that we have been relegated to under Trump.

Hillary Clinton’s campaign focused on what a terrible person Trump is. It turned out that enough voters knew that and didn’t care. They wanted a racist Rottweiler.

Now the Democrats are once more focused on what a terrible person Trump is. Message received, many times over.

The progressives’ cry that they don’t care about the political consequences because they have a higher cause is just a purity racket.

Their mantra is like that of Ferdinand I, the Holy Roman Emperor: “Fiat iustitia, et pereat mundus.” “Let justice be done, though the world perish.”

The rest of us more imperfect beings don’t want the world to perish. And maybe justice can be done, without losing the White House, the House, chocolate, high heels, parties and fun.