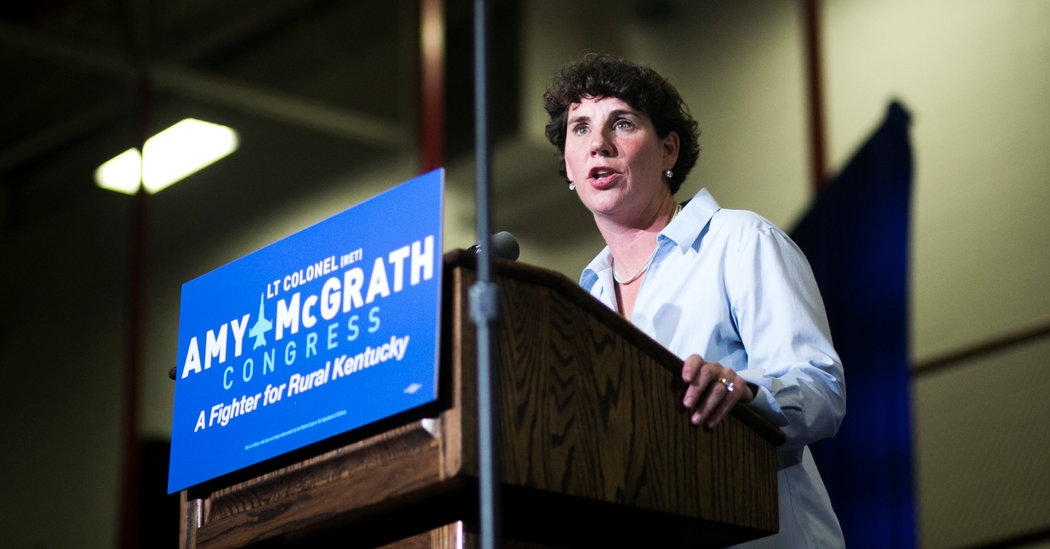 Amy McGrath, a retired Marine lieutenant colonel and combat pilot who is seeking to unseat Senator Mitch McConnell in 2020, raised $2.5 million in the first 24 hours of her campaign, her campaign manager said Wednesday.

The fund-raising haul eclipsed the first-day total raised by some heavyweight contenders for the Democratic nomination for president, like Senator Elizabeth Warren of Massachusetts and Senator Kamala Harris of California. It suggests that Ms. McGrath retains some of the star power she harnessed during her failed bid last year to capture a House seat in Kentucky.

It is also an indication of just how badly Democrats want to oust Mr. McConnell, the Senate majority leader.

In a brief telephone interview on Wednesday morning, Mark Nickolas, Ms. McGrath’s campaign manager, said the $2.5 million she raised is the most ever in the first 24 hours of a Senate campaign. The donations came from about 69,000 donors who contributed an average of $36.15 each, he said.

[We tracked down the 2020 Democrats and asked them the same set of questions. Watch them answer.]

A spokeswoman for the Democratic Senatorial Campaign Committee confirmed that Ms. McGrath’s first-day total was a record. The former astronaut Mark Kelly raised $1 million during the first day of his senate campaign in Arizona earlier this year.

Mr. McConnell’s fund-raising prowess is also formidable. In his 2014 re-election campaign, he spent more than $30 million.

“It looks like it’ll be a long campaign,” Mr. Nickolas said.

Ms. McGrath, 44, announced that she would challenge Mr. McConnell, 77, on Tuesday, releasing a scathing video in which she placed the blame for dysfunction in Washington squarely on his shoulders.

“Everything that’s wrong in Washington had to start someplace,” Ms. McGrath said in the video. “It started with this man who was elected a lifetime ago, and who has, bit by bit, year by year, turned Washington into something we all despise.”

Democrats have been frustrated by their failures to recruit some top-level targets for Senate races. They include Stacey Abrams, who ran for governor in Georgia last year but said she would not run for Senate in 2020. Other potential candidates have chosen to run for president instead, including Gov. Steve Bullock of Montana, former Representative Beto O’Rourke and the former housing secretary Julián Castro of Texas, and former Gov. John Hickenlooper of Colorado.

But Ms. McGrath is one of several Democrats to mount a high-profile challenge to a sitting Republican senator.

Sara Gideon, the speaker of the Maine House of Representatives, said last month that she would challenge Senator Susan Collins. Jaime Harrison, the first black chairman of the South Carolina Democratic Party, has declared his candidacy for the Senate seat held by Lindsey Graham. And Mr. Kelly, the former astronaut and gun-control activist who is married to Gabrielle Giffords, said in February that he would take on Senator Martha McSally of Arizona.