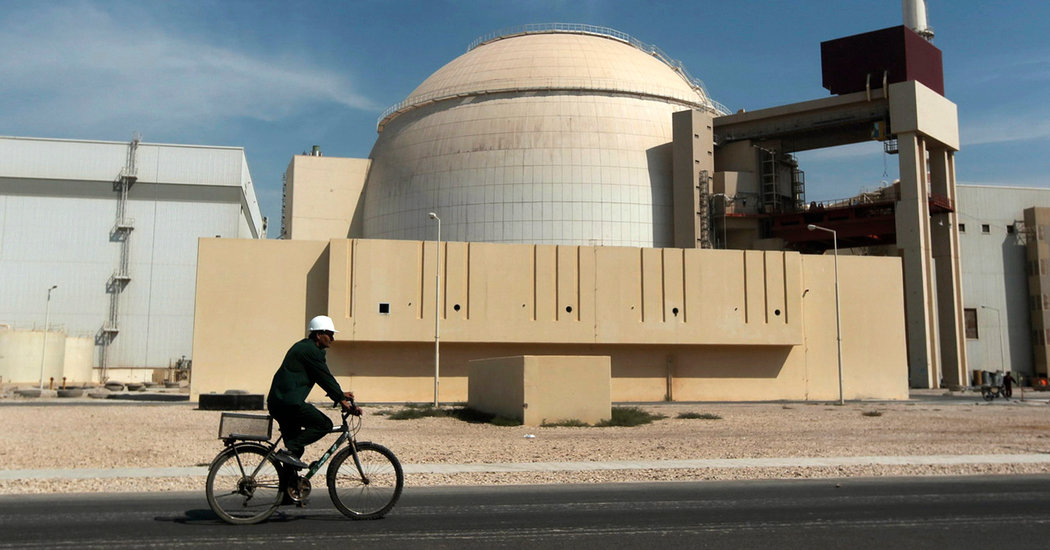 Amid escalating tensions with the United States, Iran has surpassed the limit on the uranium supply permitted under the 2015 nuclear agreement, the International Atomic Energy Agency reported on Monday.

The breach of the cap does not by itself give the country the material to produce a nuclear weapon. But it is the strongest signal yet that Iran is moving to restore the far larger stockpile that took the United States and five other nations years to persuade Tehran to send abroad.

Iran declared its plan to surpass the uranium limit on June 17, after the United States accused it of attacking two oil tankers, and days before Iran shot down an American drone and President Trump approved, then aborted, a strike in retaliation.

Iranian leaders have sought to justify these steps as a response to the Trump administration’s abandonment of the nuclear accord last year and its reimposition of sanctions, which have weakened Iran’s economy and in particular choked its ability to sell oil, the country’s most important export.

Iran insists its nuclear work remains peaceful, as guaranteed under the accord. But it also insists that the country has the right to stop honoring some or all of the provisions because the United States has reimposed sanctions in violation of the accord.

Here are questions and answers on whether Iran has violated the agreement, the possible consequences, and what could happen next.

Is the breach significant?

Iran is permitted to keep up to 300 kilograms, or about 660 pounds, of uranium enriched to 3.67 percent purity, a level that can be used for civilian purposes like nuclear power fuel. This is a fraction of the uranium stockpile it had once amassed, which was shipped out of the country after the nuclear agreement took effect.

The limit is among several restrictions in the 2015 accord designed to prevent Iran from producing enough uranium enriched to a purity high enough for a nuclear weapon.

The Arms Control Association, a nonproliferation group based in Washington, has estimated that Iran would need roughly triple the amount of 3.67 percent-enriched uranium it is permitted to possess under the accord in order to further enrich the material into weapons-grade strength sufficient to make one bomb.

Breaching the 300-kilogram limit of low-enriched uranium is not in itself a signal that Iran intends to abandon its pledge of peaceful nuclear development. But Iranian officials, in announcing their plans last month, said they were quadrupling production of low-enriched uranium, raising the possibility they could start stockpiling far greater quantities again.

Does this mean Iran is violating the nuclear agreement?

That depends on whom you ask. Iranian officials have said they remain a party to the agreement — unlike the United States. The Iranians have cited language in the agreement, known as the Joint Comprehensive Plan of Action or J.C.P.O.A., in which Iran asserts that if nuclear-related sanctions are reimposed, that would be “grounds to cease performing its commitments under this J.C.P.O.A. in whole or in part.”

Western experts on the agreement have disputed Iran’s reasoning. “It’s basically a unilateral interpretation from the Iranian side of what the nuclear deal means,” said Henry Rome, an Iran analyst at the Eurasia Group, a Washington-based political risk consultancy. “In their view they can reduce compliance commensurate with what the other side does.”

Are other countries violating the accord?

Yes. The United States, by Mr. Trump’s own declaration, is not complying with its provisions, describing the agreement as a disaster that needs to be renegotiated with Iran. The other parties to the agreement — Britain, China, France, Germany and Russia — have all said it was working and have exhorted the United States to rejoin.

Iranian officials have argued that the accord’s European members are not complying with the accord because they have failed to provide the promised economic benefits, fearing American retaliation. The secretary of Iran’s Supreme National Security Council, Ali Shamkhani, said last week that Iran will suspend more of its commitments starting July 7 unless the Europeans stop their “deceitful political attempts aimed at restricting the Iranian people’s obvious rights.”

Mr. Shamkhani did not specify what commitments might be suspended. Other Iranian officials, including President Hassan Rouhani, have hinted at higher uranium enrichment levels, which could reduce the time needed to attain weapons-grade fuel.

Where do the Europeans stand?

European officials, in their most vivid split from Mr. Trump, are scrambling to preserve the agreement, fearful that if it falls apart, the United States and Iran could be headed toward military conflict — and perhaps war.

They have urged Iran to adhere to the accord’s requirements but have not specified what action might be taken otherwise. The accord has a provision for addressing accusations of noncompliance, in which a joint commission would evaluate complaints and try to rectify them. None of the participants have resorted to that provision so far, partly because of fears it could unravel the accord.

“Then you enter a state when the Iranians or the other parties will think the deal is dead,” Mr. Rome said. “The hesitancy from the Europeans is they don’t want to start that process.”Diplomats from Britain, France and Germany reiterated last week at the United Nations Security Council that they want “full implementation” of the nuclear agreement.

What role does the United Nations Security Council play in this crisis?

The Security Council adopted a resolution in 2015 that endorsed the nuclear agreement and ended United Nations sanctions against Iran. The resolution, 2231, includes what is known as a “snapback” provision that could reinstate those sanctions if other parties to the agreement complained that Iran was cheating. Such a step would most likely doom the agreement.

Could the United States invoke the ‘snapback’ provision?

That is an unresolved question. While the United States is a member of the Security Council, it is no longer a party to the nuclear agreement and may not have the legal grounds to invoke that provision. And other parties to the agreement who wish to preserve it — including American allies on the Security Council — might challenge the United States were it to make the attempt.

“If the U.S. doesn’t have the standing, it’s not quite clear what happens,” said Richard Nephew, a former State Department sanctions expert who helped negotiate the Iran nuclear deal and is now a research scholar at Columbia University’s School of International and Public Affairs. “It’s unfortunate but that has become a real mess.”